This is the Japanese chiller from 2002 as opposed to the Sarah Michelle Gellar remake which I refuse to watch for the same reasons I won’t see the Naomi Watts Ring remake. I’m not racist, I’m just tired of white people taking jobs away from terrifying Japanese children.

Takashi Shimizu’s film formed part of the late-90s/early-00s J-Horror boom alongside movies like Audition and Ring, from which it lifts the idea of a curse involving a long-haired Onryō or vengeance demon. Most of the movie takes place in a murder house, starting with a visit by social worker Rika (Megumi Okina), not to be confused with Riker. Though once she’s haunted by the murdered Kayako (Takako Fuji) a Number One would be the appropriate response. The film proceeds in segments, each one following a different character without explaining how they relate to each other, making it a confusing watch. And that’s before we even get to the meowing ghost-boy. 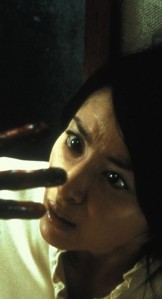 Initially I wondered whether this confusion was down to my not having seen the straight-to-video instalments and short films that preceded this feature, but having watched the latter on YouTube, I think it’s safe to assume that Shimizu’s style is wilfully discombobulating. To him “clarity” is just a word you’d use to describe wine. Except that joke doesn’t work because he’s Japanese. While these shorts make little difference to the story, they do help to understand that the film is essentially more of these spooky vignettes stapled together. And they’re brilliantly executed, combining a number of eerie sound and visual effects inspired by Ring and The Exorcist, including creepy children, spider-walks and the scariest shower scene since Psycho.

There’s so much going on in fact that it’s almost easier to discuss what Shimizu doesn’t do, and why the film works as a result. He doesn’t explain what’s going on, overplay CGI monsters or make the music go quiet so we know something scary is about to happen. He’s much smarter than that, employing a range of techniques that stop you from guessing where the next scare will come from, whether it’s a frightening glimpse in the corner of the frame or a lingering, guttural throat sound. This mixture of weird imagery, disorienting structure and creeping atmosphere gives the film a downright wonky quality that stays with you long after you may have first thought.

Ju-on: The Grudge is hard to follow but harder to swallow, as freaky and disjointed as Kayako herself. Although it lacks the cohesive, haunting beauty of Ring, this disparity didn’t stop the two franchises from crossing over in last year’s Sadako vs. Kayako. Ever noticed how these crossover movies always list the superior entity first? Freddy vs. Jason. Alien vs. Predator. Batman vs. Superman. The People vs. George Lucas.