Sally Hawkins plays Elisa, a cleaner in a military research facility who develops an affinity with the new ‘asset’ – an aquatic humanoid from the Amazon. Think ET or Free Willy, but featuring Abe Sapien on steroids. 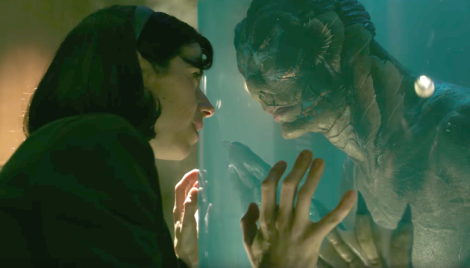 The Shape of Water has been making waves since its US release, and after an impressive 13 Academy Award nominations, expectations were high. Fortunately director Guillermo del Toro delivers in waterfalls. His unique hallmarks are employed, from a distinctly del Toro-esque creature to a penchant for wince-inducing violence, but here they make a bigger splash than ever before.

Choosing a 60s setting with a soundtrack of classic Hollywood jazz, the preferred listening of Elisa and best friend Giles (Richard Jenkins), the film has a totally distinct look and feel. It would have been unique and fascinating even without this, but thanks to the design it takes on a form as unique as the unnamed creature at its core.

Hawkins is superb as the mute janitor, heading up a roster of superbly written and acted characters including reliable favourites like Octavia Spencer and Michael Shannon, the lesser-known but still excellent Jenkins and Michael Stuhlbarg, and del Toro favourite Doug Jones as the creature himself.

The highly focussed screenplay takes us to just a handful of locations, and skirts past unnecessary details like the name or purpose of the research facility. Everything is told through Elisa’s eyes, and the romance between her and the creature is poetic. The allegories and imagery give the film a richness which surely puts it in contention for the Best Picture gong, while never feeling like overplayed Oscar bait.

Arguably del Toro’s finest film, this is a beautiful, unique and otherworldly film which deserves every one of its 13 nominations. Technically accomplished in every way, and superbly written and acted, it represents a high watermark of modern cinema.

4 responses to “The Shape of Water”