While there have been many high quality franchise movies in recent years, 2018 may be remembered as the year taste forgot and previously impervious-seeming cash cows ran out of golden milk.

Jurassic World: Fallen Kingdom managed to follow up the wildly successful Jurassic World with a film which was undeniably terrible, with unfettered stupidity from beginning to end.

The confusingly-titled The Predator (AKA Predator 4) dusted off the ugly alien for a meandering tale featuring a super-predator and his dog. While it tried to take the franchise in a new direction it ended up taking it to the grave with a bizarrely-plotted snooze-fest that brought in just $160m globally.

Meanwhile Disney’s three year experiment with an all-you-can-eat Star Wars buffet came to an end with epic dud Han: Solo. It suffered from an uninspiring story and disastrous casting, which, combined with costly re-shoots, managed a feat even George Lucas couldn’t: a Star Wars film that actually lost money.

But perhaps the biggest failure was the film that brought together some of the world’s favourite superheroes (and Aquaman): Justice League. This represented another nail in the coffin of Warner Bros’ attempt to cash in on their existing properties with as little effort as possible. And with the dreadful Aquaman solo effort later in the year, there’s now more nail than coffin.

With mainstream audiences deterred by traumatic memories of Batman v Superman, and the fan of that film being put off by Justice League‘s lighter tone, Warner Bros saw its cash disappear faster than you can say Steppenwolf. Main stars Henry Cavill and Ben Affleck announced their departure from the franchise as soon as courtesy would allow, and the DCEU looks like it may now be a thing of the past. So there is some justice, after all. AC

While a meal was made of a great many movies this year, we’re going to take this category much too literally, Bohemian Rhapsody style: the best meals consumed on the big screen in 2018. The standout is Phantom Thread‘s Reynolds Woodcock (who also happens to be the uncontested winner of the Best Name award) and his outrageous breakfast order, delivered with delicious deadpan delicacy by Daniel Day-Lewis. No wonder he’s retiring after eating all that. 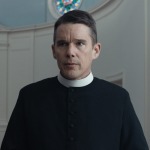 Another contender for the Stomach of Steel Trophy (which confusingly contains no steel, on account of being fictional) has to be Ethan Hawke, whose priest character in First Reformed has his own, less flashy breakfast routine: pouring Pepto-Bismol into a glass of whisky. Drinking something that causes and instantly cures heartburn represents the height of efficiency, and to that we raise a glass.

The other great meal of the year was surely the bucket of fried chicken Viggo Mortensen shares with Mahershala Ali in one of many heart-warming scenes that make up the pages of Green Book. Sadly though this blog is 100% vegan, so the winner of the Best Meal award is instead… all the scenery that was chewed by John Malkovich in Bird Box. Ha, we weren’t being literal after all, we did an M. Night Shyamalan. Unfortunately, so did he. DM

Overrated Film of the Year

You can learn all you need to know about the state of modern horror when Hereditary is hailed as a masterpiece. The completely un-shocking shocker used tired seance scenes and bump-in-the-night scares which won it inexplicable praise, presumably from people  who were just relieved it wasn’t another Purge film.

But Wes Anderson was more successful in achieving undeserved acclaim, with Isle of Dogs – a tale about some Japanese canines infected with a virus that makes them talk like middle aged white American men. The un-funny adventure was Anderson at his worst, yet somehow managed to please audiences and critics alike.

But my winner has to be Sorry to Bother You, a bothersome film about a guy who works in a wacky call centre. The muddled script feels like it was written by school kids (complete with dick jokes) and the objects of its stupifyingly obvious satire have been taken on far more effectively elsewhere. Yet in spite of feeling like this year’s Downsizing it has a Rotten Tomatoes rating higher than that of The Elephant Man, making it my pick for overrated film of the year. Hang up and don’t call back. AC

Say what you like about Hollywood’s diversity problems, they’re always willing to cater to the hearing impaired. The Meg, Skyscraper and Rampage all tested the limits of the human ear using sharks and explosions (often at the same time), while Aquaman played a Pitbull version of Toto’s Africa at a volume clearly unsafe for actual pitbulls.

That said, the loudest film of 2018 was A Quiet Place, whose filmmakers failed to see how much more immersive a film set in a silent environment would be made by reflecting that silence in the sound design. This means it also takes the Irony Trophy (again, contains no actual iron) once held by Gravity for a title so unrepresentative of the actual movie. In any case it’s hard to muster excitement for next year’s sequel, unless it somehow renders Emily Blunt unable to talk in another Mary Poppins movie. DM

The Golden Goblin for Best Film

While 2018 may have been about as good for films as it was for politics, that’s not to say there haven’t been a few diamonds in the rough. The world of big franchises was kept afloat by Marvel, with two impressively good bangers; Black Panther and Infinity War.

Last year’s Best Picture winner deserves a mention: Guillermo del Toro’s beautifully made tale of a woman who finds a kindred spirit in a strange, aquatic creature being held at a research facility, The Shape of Water. Frances McDormand gave a career-defining performance in Three Billboards Outside Ebbing, Missouri, while Steve McQueen proved everything he touches turns to gold in Widows, the penultimate film to star Liam Neeson.

There were two films which looked at how religious tradition functions in the modern world, Disobedience and First Reformed, both of which were fascinating in their own ways. Chilean film A Fantastic Woman is one of the few examples of a film about a transgendered person played by a transgendered person and BlackkKlansman was Spike Lee at his political best, taking on the Trump administration by drawing scathing parallels to the KKK.

It’s hard to pick just one of these, so let’s just say everybody wins.  Invisible goblin-shaped statues all round. AC

Isle of Dogs isn’t the only animation which failed to impress this year. Aardman managed to create their worst ever film with Early Man, the baffling caveman football movie that deserved the red card. It was conceptually confused, and while it maintained their appealing and instantly recognisable Plasticine animation style, it lacked their usual charm.

But the award goes to The Grinch which, in spite of being better overall than Early Man, loses points for being a totally unnecessary remake of the famous green scrooge, without the humour or heart of its live action counterpart. Bah, humbug. AC

As Wes Anderson was making a dog’s dinner, other animations came out less ruff. Pixar assembled an uncharacteristically super sequel in the form of Incredibles 2, combining elasticity, domesticity and a scene in which Jack-Jack fights a raccoon; the best altercation between a baby and an animal since Trump vs that eagle. Later in 2018 we entered the Spider-Verse, a whirlwind introduction to the Miles Morales incarnation of Spider-Man that left millions of eyes in a spin.

Better still was The Breadwinner, a Canadian-Irish-Luxembourgian co-production about an Afghan girl surviving under the Taliban. Nora Twomey baked frightening, realistic storytelling and childlike imagination into The Breadwinner, producing a fresh slice of poetic, political animation. Ciabatta make another film soon. DM

We’ve mentioned Jurassic World: Fallen Condom, but that was far from the only 2018 sequel that had us “doing a Sandra Bullock” and reaching for the blindfold. Remember Pacific Rim: Uprising? Us neither. Mamma Mia! Here We Go Again deserves a special mention for including a moment where Lily James accidentally pokes a horse in the eye, but it’s a damn sight more entertaining than the likes of Glass, Halloween (2018) or The Equalizer 2, so called because it’s about as much fun as a maths lesson.

But the goblin statuette for Worst Sequel goes to The Strangers: Prey at Night (when else are they going to prey, realistically?), if just for this unintentionally hilarious sequence. “No! Please! Not Kim Wilde! Anything but that!” DM