The long-awaited biopic of the Queen front man finally makes its way onto our screens, charting the journey of Freddie Mercury (Rami Malek) from the formation of Queen to their conquering the world.

Any biopic has to take a few shortcuts, but this astoundingly lazy script is all shortcuts. In one of the film’s first scenes, Freddie goes to a gig by Smile, featuring future band mates Roger Taylor and Brian May, and meets his longtime partner Mary (Lucy Boynton). The band’s lead singer then quits, and Freddie takes over. All in one evening.

But scenes like this are the rule rather than the exception, as key events are thrown together in nonsensical scenes which make it feel less like real life, more like fantasy. And there’s no escape from the reality that it feels like it was written on the back of a cigarette packet.

Ironically for a film with such a troubled production history, it never succeeds in showing the struggle of the creative process. The recording of Bohemian Rhapsody, which in real life was an arduous experience for the impoverished band, is shown as a speedy and enjoyable process. And they miss the chance to show Mercury composing Crazy Little Thing Called Love in the bath, Winston Churchill style.

In spite of Queen’s constant real-life innovation, the film hits the most predictable series of dramatic notes imaginable, as greedy producers get in the way and naysayers are proven wrong. It focuses too much on events we already know all about, rather than shedding light on the reserved Mercury’s inner workings, which is a particular shame given the involvement of May and Taylor. The screenplay’s only strengths are its reasonable pace and the fact it manages to bring to life some of Mercury’s wit. 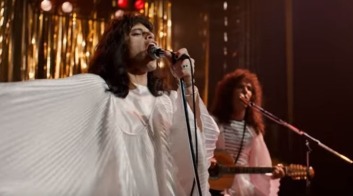 It’s a shame, because the film has a lot going for it, in particular the performances. Malek, who doesn’t naturally look like Mercury, so excellently captures his voice and mannerisms that he convinces in spite of the comically oversized teeth he’s forced to wear. The rest of the band are given equal billing, with an excellent trio of actors (Gwilym Lee, Ben Hardy and Joseph Mazzello) playing May, Taylor and John Deacon. Lee in particular looks and sounds identical to everyone’s favourite guitar-playing physicist.

The concert scenes are some of the best-done aspects of the film, and the soundtrack of Queen favourites can’t help but lift your spirits. And in spite of how poorly written it is, the iconography of the reconstructed scenes, and the genuinely moving nature of the real-life events manage to make it pull on your heartstrings nonetheless. What results is far less than it could have been, but an enjoyable experience for any Queen fan.