Dan recently proved that he doesn’t know me at all by buying me a film about a bunch of sexy men who undress for a living. Fortunately the Magic Mike works even for people who aren’t interested in sexy men. This is because it’s about more than stripping. It’s also about dancing, muscles, and breakaway chaps. 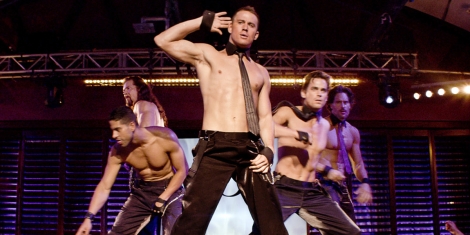 But it’s also about real people, specifically Mike himself (Channing Tatum) and his young protégé Adam (Alex Pettyfer). Mike finds Adam on the streets of Tampa and brings him back to the club where he encourages him to strip for the first time.

Tatum is excellent as the titillating titular character, showing he’s more than just a set of bulging abs. His dance moves are incredible and he also brings a reasonable level of depth to the part. But it’s Adam who’s the main character, with the film focusing on his introduction to the world of stripping, and what happens after the lights have gone down when the clothes have been gathered from various locations around the bar.

For him it’s a coming-of-age story. A 19-year-old college dropout working in construction, he’s liberated by his newfound income and popularity. But he’s taught a harsh lesson in responsibility when he fails to take the work seriously, finding himself in some surprisingly serious predicaments.

So it’s not all fun and games for Mike and friends, but in spite of showing the darker side of life in the sex industry, it takes a very non-judgemental view of this alternative lifestyle. As a result it succeeds on many counts, striking a perfect balance between serious drama, light entertainment and homoerotic mayhem.