Stanley Kubrick supposedly intended Dr Strangelove to be a serious Cold War thriller but ended up making a comedy due to the unavoidable absurdity of the situation. But in an age where it feels like the news is constantly trying to out-crazy itself, how does it measure up? 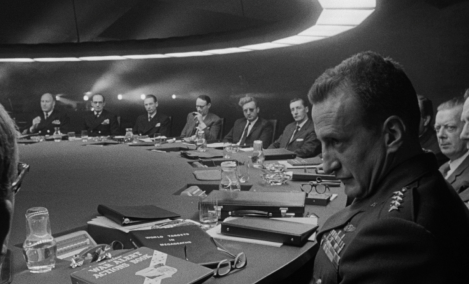 The answer is never better. The film has three separate elements, connected only by phone calls and their mutual interdependence: the President’s (Peter Sellers) war room, a B-52 bomber and its crew, and a paranoid Air Force commander (Sterling Hayden) who called a nuclear strike on the USSR and is now besieged on his base. Kubrick delicately balances these three elements and brings his satirical view to them all.

But it’s the war room where the best and funniest moments occur as the supposed best and brightest of the world’s strongest superpower try and win a zero sum game. From the weapons-obsessed general looking for any excuse to order a strike, to the president’s marital bickering with the Premier of the USSR, and Dr Strangelove himself (Peter Sellers) who can barely hide his Nazi past. Senior government officials even carry out their discussions in the presence of the Russian ambassador (Peter Bull). Who could be that stupid? 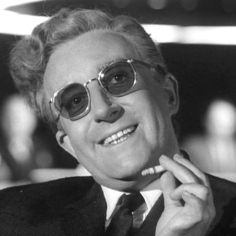 The situation, in which nuclear bombs are sent to Russia unintentionally,  arises entirely through incompetence, rendering the logic of both the American and Russian positions redundant. On the American side the fail-safes live up to their name and fail to keep anyone safe, as the bomber pilots are impossible to contact. And on the Russian side, the Beneath the Planet of the Apes style doomsday device, designed to guarantee they won’t be attacked, is made totally useless due to the fact they’ve forgotten to tell their adversaries about it.

There’s remarkable attention to detail in every scene from the ‘Peace is Our Profession’ slogan seen around the military base to the Star Warsy War Room complete with a ‘big board’. Peter Sellers gives three brilliant performances as the titular doctor, the President and the affable English soldier. The soundtrack makes heavy use of The Elephants Went in Two by Two. I don’t know if those are the original words to the tune, but the militaristic march combined with invoking the song’s lolloping lyrics (the version used is vocal-less) further highlights the absurdity of the situation.

And the whole thing is begun by a rogue commander, who makes Joe McCarthy look like Trotsky. His obsession with Communist infiltration extends to a bizarre conspiracy theory about them altering the water supply, almost identical to Alex Jones’s theory that liberals are poisoning the water to turn frogs gay. Except in the 21th century it’s not just mid-ranking military officials who are susceptible to conspiracy theories it’s the president himself.

Dr Strangelove stands alongside The Great Dictator as the finest satires of the 20th century’s darkest events, and like The Manchurian Candidate it feels even more true to life now than when it was made. 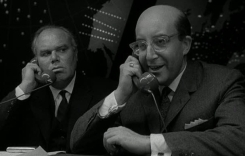 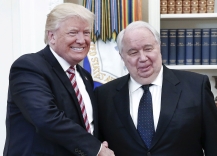 4 responses to “Dr Strangelove: Or How I Learned to Stop Worrying and Love the Bomb”