A boy growing up in foster care, Billy (Asher Angel), is abducted by a wizard (Djimon Hounsou) who gives him superpowers so he can fight the Seven Deadly Sins, embodied as gargoyle-like monsters with ambiguous motives.

The film’s biggest strength is the multi-ethnic foster family Billy finds himself in. They are all likable, well-drawn characters, in particular Jack Dylan Grazer as Billy’s superhero-obsessed foster brother Freddy who gives the best performance in the film.

The character allows plenty of references to DC superheroes, in addition to the DC merchandise which appears in every other scene, which is even more jarring than Marvel’s Star Wars references following the Disney buy-out, particularly since everyone hates those DCEU films, none more so than the people who were in them.

Ironically it goes downhill once Billy gets his powers, resulting in comedy scenes which will be no surprise if you’ve seen the trailer and the predictable ‘superhero getting their powers’ tropes, from beating up the bullies to accidentally destroying things. Angel and Zachary Levi both give good performances as Billy and his superhero alter ego, but they don’t really feel like the same character.

Levi plays the hulking, spandex-clad hero like an excited kid with a new action figure, whereas Angel’s disaffected teen of noble heart doesn’t quite match up. This may be a deliberate choice: the powers give him a confidence and excitement he doesn’t normally have, but it has the effect of making them not feel like one character.

There are plenty of jokes, some of them funny, which along with the colourful visuals make it feel like DC’s attempt at a Marvel movie. In fact Shazam was the original Captain Marvel before Marvel acquired the rights to the name, meaning the Captain has had two mediocre films starring Djimon Hounsou in less than a month. 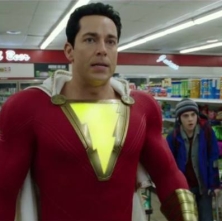 Once he’s empowered, there’s just one, generic villain (Mark Strong), who, in the Marvel origin movie formula, was created in the same way he was. The hokey mythology that gave Shazam his powers then becomes crucial to the final act, highlighting how vague and flimsy it is. The process of him getting there is not particularly interesting, nor is the DC-trademarked 40 minute action finale. Again the best moments come from the kids rather than the hero/villain battle.

The result is a great improvement for DC: a likeable, sometimes fun film, which is certainly better than their other recent efforts. But it ultimately feels rather unsatisfactory, and it’s hard to escape the feeling that you might as well just watch a Marvel film.

One response to “Shazam!”