A frontier family must defend their home after their adopted sister (Audrey Hepburn) is revealed to have been stolen from a Native American tribe in 1960’s The Unforgiven, a kind of reverse version of that time Elizabeth Warren took a DNA test.

Not to be confused with Clint Eastwood’s Unforgiven, there’s more than the definite article separating these two Westerns. Instead of the tried-and-tested tough guy revenge formula, John Huston paints a haunting picture of a nation ravaged by racism; set in the Old West but really about contemporary America. This proved too controversial for the producers who forced Huston to make concessions to commercialism (and nothing draws a crowd like seeing Native Americans murdered), leaving Huston dissatisfied with the end result.

He needn’t be; this is a beautiful film with a great deal of integrity. Made during his horse period (as in Westerns, he wasn’t on heroin) at a time when the genre was still dominated by Confederate apologism, indigenous genocide and John Wayne pretending to be Genghis Khan, Huston’s sensitivity shines like the Texas sun. Like a prettier version of The Hills Have Eyes, it’s a movie that confronts America’s genocidal foundations; a family pays in blood for atrocities committed by its forefathers. 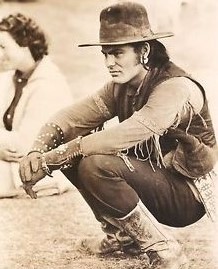 Just as Wes Craven’s film comments on the Vietnam War, Huston’s invokes the KKK and McCarthyism (and both films address the treatment of Native Americans) as the white folk turn on the girl they’ve known her whole life at a speed that’s both alarming and familiar. Hepburn is wonderful as ever (despite falling off a horse and breaking her back during filming, as well as not really looking Native American but at least she doesn’t do a John Saxon), opposite Burt Lancaster who looks like Charlton Heston in a Robert Redford wig.

The women are also uncharacteristically strong for this type of movie; Hepburn’s character tries to do the right thing and return to the tribe to avoid bloodshed, while her adoptive mother (The Birth of a Nation‘s Lillian Gish) takes up arms to defend her family and insists they “stop fussing” when she gets shot. The toughness of both characters suggests that their marriage-obsessed neighbour (Kipp Hamilton) is designed to provide contrast rather than reinforce old-fashioned gender roles.

The stunning photography and well-drawn relationships set the stage for an action-packed siege climax that feels real because Huston has built a world where actions have consequences, moral complexities and emotional weight. The Unforgiven might be the best (non-Leone) Western, a sad and striking portrayal of the way racism destroys families; truly a pioneering work.