A couple, Jill and Bob Lawrence (Edna Best and Leslie Banks), are on a skiing holiday in the Alps with daughter Betty (Nova Pilbeam). When a holiday friend (Pierre Fresnay)  gets shot, he hands them a note on his deathbed with details of a plot on the life of a foreign dignitary. Before they can pass on the news to the Foreign Office, Betty is abducted and threatened with death if they pass on what they know. 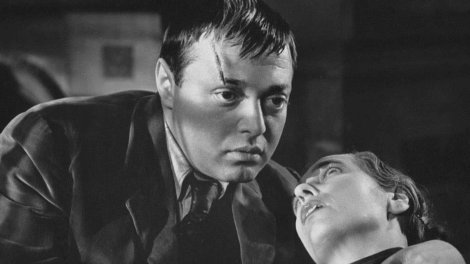 This 1934 follow-up to Waltzes from Vienna is the first Hitchcock film to carry this title (the other being the 1956 film starring James Stewart), and while some of his later hallmarks are there, most notably a tense finale in an iconic building (the Royal Albert Hall), the storytelling leaves something to be desired. It has a pleasing circularity to it, but is confusing in places and the villains’ motivations are never really made clear with a plan which seems ill-conceived at best.

The main villain, however, is played to camp perfection, complete with dodgy haircut, by Peter Lorre, who had the finest child abduction acting experience available having starred in Fritz Lang’s M in 1931. He learnt his lines phonetically, having just fled Nazi Germany, but it doesn’t show, and it’s not surprising he went on to play the first ever on-screen Bond villain in 1954’s Casino Royale.

It also has a great female part: sharpshooting mother Jill who, in spite of being rather short-changed by the title, does far more to get their daughter back than dad Bob, who manages to be comically unsympathetic when reunited with her, rambling about her school report and dressing gown rather than engaging in any frivolous displays of paternal affection. And other elements are just plain weird, such as when Bob goes to a sun-worshipping church in Wapping and Clive (Hugh Wakefield) is hypnotised by the priestess.

Hitchcock would later claim the film was the work of a talented amateur; perhaps the man who knew too little? As such it’s an intriguing and unique film which certainly has its strengths, even if the master of suspense has not yet achieved true mastery.

One response to “The Man Who Knew Too Much”