Patrick Swayze shows off his mambo skills in the Catskills in this 1987 dance-and-abortion classic. 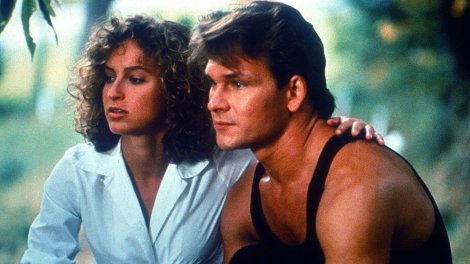 Nobody puts gravy in the korma.

There are two interesting things about Dirty Dancing and they’re both Gilmore Girls related: the choreography is by Gilmore director Kenny Ortega and Kelly Bishop appears but is utterly wasted – and not in the fun way. Everything else is generic ’80s fare about some unsympathetic people holidaying in a bizarre dance resort/Bond lair/Butlin’s, where a teenager irritatingly called Baby (Jennifer Grey) falls in love with dance instructor Johnny (Swayze). It’s essentially Top Gun with dancing instead of flying, and feels similarly dated and reactionary. Baby gives up her dream of becoming a lawyer because she falls for a hunky dead-ender, which hardly feels like cause for celebration.

That it’s set in the ’60s is immaterial to the filmmakers who furnish the drama with Reaganism and ’80s cheese, particularly the incongruous Kenny Logginsy music – (I’ve Had) The Time of My Life became an Oscar-winning hit, beating a song from Mannequin because the ’80s were the decade that taste forgot. Why include an abortion in such a cheesy movie? Why should we care about some good-looking people’s relationships? And why is she called Baby – can we abort her instead? There’s no dearth of dancing and some great ’60s dance songs, with Swayze’s machismo carrying the lazy plotting over the finish line. You won’t have the time of your life, but it’s definitely some time of your life.