Did you know there’s an episode of Tom & Jerry where they both commit suicide at the end? I mention this partly because it’s the darkest thing I’ve ever seen (to say nothing of the implications for the rest of the series) and also to introduce Hollywood’s second-bleakest game of cat-and-mouse.

Adapted by the Coen brothers from Cormac McCarthy’s neo-Western, No Country for Old Men is an existential thriller about America. A violent chase between a Vietnam veteran (Josh Brolin) failed by the system and a psychopath (Javier Bardem) who thrives under it (another film about Trump), the movie features none of the black humour usually found in even the darkest corners of the Coens’ filmography. 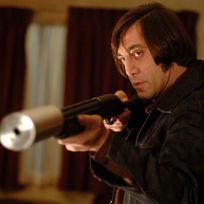 Instead they wring every drop of tension from the sparse environments and Texan wilderness, spattering motel walls with blood and garnering frighteningly committed performances from their grizzled actors. This may be no country for old men but there’s plenty of room for gold ones, winning 4 Oscars including best supporting actor for Bardem’s truly terrifying turn as a ruthless hitman armed with a cattle gun and the world’s most horrifying haircut.

The overall effect is disquieting if slightly dissatisfying, since it belongs to the sub-genre of cinema where the characters have nothing to lose (see also I Saw the Devil) and because the sheriff (Tommy Lee Jones) has no bearing on the plot beyond a series of hushed conversations about being old. Nevertheless, the movie is arresting even if the sheriff does not.