Mad scientist Victor Frankenstein (Johnny Lee Miller) faces the consequences of the maddest experiment since they made that reality TV host US President, in this production from the National Theatre. It’s live! It’s live! 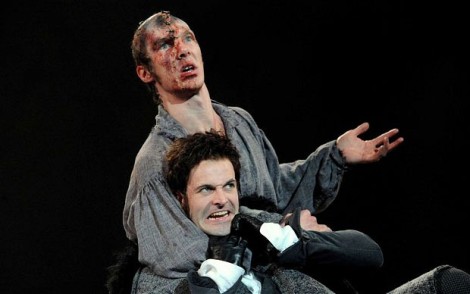 This outstanding production is the best Frankenstein adaptation I’ve seen. Typically Mary Shelley’s story of a misunderstood but innocent creature being ostracised for his appearance is turned into generic monster attack fare. But here the creature (Benedict Cumberbatch) is developed as well as, or even better than, Frankenstein himself.

When it debuted in 2011 it alternated between Cumberbatch and Miller as creator and created. This gives the characters equal importance and crucially allows them to be explored to the fullest extent. We watched the version with Cumberbatch as the creature, who gives an incredible physical performance as the writhing, staggering, desperate outcast. 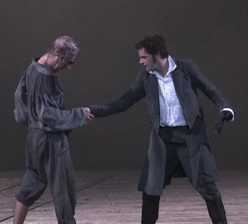 With Frankenstein not playing a significant role until some way into the play it’s the creature’s tale, and he’s played with sensitivity and emotion. This focus wouldn’t be possible with a Boris Karloff style mindless monster and surpasses even the excellent balletic adaptation for authentically capturing the essence of the novel.

The structure is almost a complete reverse of 2015’s tedious Victor Frankenstein which saw the creature take form in the film’s dying moments. Here the play begins with the quasi-biblical act of creation, with creator absent as his creature emerges, staggers to life and attempts to make sense of a confusing world.

It’s bolstered by superb staging and direction from Danny Boyle, using all the tricks the National Theatre’s round stage has to offer. The result is a gripping, enthralling and moving adaptation which will satisfy everyone except fans of monster rampages.

Frankenstein featuring Benedict Cumberbatch as the creature is free on YouTube until Thursday 7 May.

Frankenstein featuring Johnny Lee Miller as the creature is free on YouTube until Friday 8 May,