During his time in New York Hercules acquires a new best pal, Pretzie (Arnold Stang), becomes a wrestling champ, takes on the mob, meets a univesity professor and ends up dating his daughter after out-muscling her current boyfriend. You certainly can’t accuse it of being low on incident. 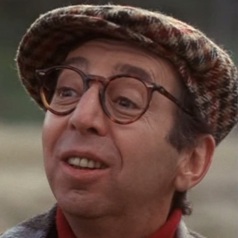 Growing up in Austria it was Arnie’s ambition to move to America, win Mr Universe and star as Hercules, in the footsteps of his idol Reg Park, and so after ticking the first two off his list, the 22-year old successfully blagged his way into this part by claiming to have done Shakespeare in Austria. And while he may be famous for his think accent, here the bodybuilder has the fresh-off-the-plane intonation of someone who doesn’t understand the words he’s speaking. As a result the intended humour in his lines never comes across, leaving Hercules feeling as simple as he is muscular.

He is so unintelligible that his voice was re-dubbed by an actual actor for the released version (still audible in one scene) and the Arnie version only saw the light of day after he became a star, and long after the studio that made the film went bust. However, unlike some other Arnie comedies, you can at least tell where the jokes are meant to be, even if they don’t quite land. 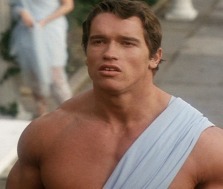 It’s a shame because there are some surprisingly committed performances from his co stars, especially Arnold Stang as Pretzie (Schwarzenegger was billed as Arnold Strong for marketing reasons). It’s filmed entirely on location in New York, which would be great if there weren’t extensive scenes set on Mount Olympus, where the Greek gods are drowned out by traffic noise.

The most remarkable thing about this film is even though it’s objectively bad in just about every way possible, it’s still middle of the pack in the Arnie canon. In spite of its many faults, it lands firmly in ‘so bad it’s funny’ territory, and features a bear attack to rival The Revenant, resulting in a film which at least doesn’t feel like a labour to watch.