Arnie takes on the mob again as a small town Sherriff who goes under cover in the Chicago underworld to bust the crime family that killed his daughter. 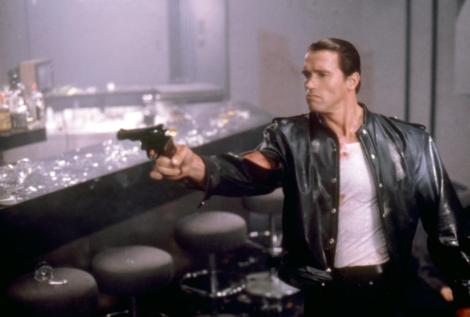 This film was made so Arnie could escape a multi-film contract with Dino De Laurentiis which was signed for the Conan films, and in his autobiography he doesn’t rate it highly. After performing badly De Laurentiis ended up filing for bankrupcy, a consquence which appears disproporionately bad for the quality of the film. But the incident did cause De Laurentiis to sell the Total Recall rights to Carolco, allowing them to make the film in which Schwarzenegger would later star.

Its failure is a shame becauase it’s a competetely-made if conventional crime caper, vastly superior to Red Sonja, which was made as part of the same contract. Arnie gives a surprisingly natural performance, given his heart wasn’t really in it and the fact natural is not a word often associated with his acting. The story is clearly told, with a tone appropriate to its content, even if it’s not always easy to tell the white men apart in a film about as diverse as Hanson. The ample action is well handled with explosions and more explosions, as well as the obligatory Arnie rampage, and so in spite of being overshadowed by the previous year’s Commando, Raw Deal is surprisingly well done.