Taylor Morden’s love letter to third-wave ska tracks the music’s journey from Jamaican dancehalls to Southern Californian garages via Coventry. The uptempo precursor to reggae, ska was brought to England by Jamaican migration where it mixed with British punk to form bands like Madness and The Specials, and then with American punk when Operation Ivy injected that 2 Tone attitude and offbeat rhythm into the Californian underground.

Morden assembles every major player from the ska-punk scene, including Reel Big Fish’s Aaron Barrett, Fishbone‘s Angelo Moore and The Aquabats’ Christian Jacobs (the only ska band to have their own TV show), all of whom describe the music’s infectious danceability and uplifting inclusivity. As well as the racial and gender diversity, ska allowed nerdy horn players from high school marching bands to be in punk groups, the only drawback being the financial unsustainability of having to split the door between 7 or 8 members. 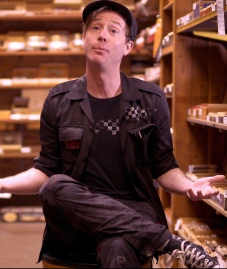 The film charts the genre’s brush with the mainstream after The Mighty Mighty Bosstones appeared in Clueless and Goldfinger on Tony Hawk’s Pro Skater, then just as quickly becoming a punchline due to a combination of over-saturation, self-parody and industry incompetence. Along the way we hear about Goldfinger’s world record for playing 385 shows in 1996, and how the checkerboard pattern became a ska symbol of racial unity because The Specials’ Jerry Dammers had some racing tape on his scooter.

Armed with the genre’s sense of irony and self-deprecation, Pick It Up! celebrates the nostalgia value of third-wave ska today, although it enjoys growing popularity in Japan and Latin America. For me it was a trip down memory lane, to my first gig experiences from before I could even drink (all of which I would leave covered in someone else’s cider), or to me and my friend Shaun putting on Big D and the Kids Table at house parties and skanking in the kitchen until someone came in all annoyed and put Pitbull back on.

Pick It Up! revels in the joy and messiness of a polarising type of music that keeps dipping in and out of the mainstream in waves, thanks to its unique ability to mesh with different styles and an inherently infectious beat that makes it the greatest onomatopoeic genre since doo-wop.