Multi-Razzie-nominated Rhinestone belongs in the rare subcategory of films based on songs (in this case Rhinestone Cowboy; the country song, not the Madvillain track) alongside Love Me Tender, Yellow Submarine and Last Christmas.

But it’s from Black Christmas that 1984’s Rhinestone gets its director, earning Bob Clark his first of two Golden Raspberry nominations (the second being Superbabies: Baby Geniuses 2). This seems unfair in hindsight, since Rhinestone is an enjoyably silly musical comedy that capably delivers on its Sly Fair Lady premise; a Tennessee musician (Dolly Parton) has two weeks to turn a New York cabby (Sylvester Stallone) into a country singer and Razzie winner. 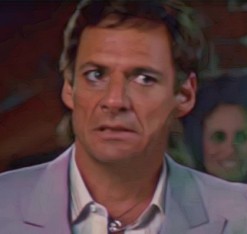 “I was nominated too!” – Rachel Green’s dad.

The contrived set-up facilitates some goofy fish out of water comedy as Sly leaves the big city and learns to be a cowboy, like an inverted version of Crocodile Dundee. The inaudible Stallone is a strange choice for this A Star is Born meets Nashville concept considering he rivals Pierce Brosnan for the worst singing voice ever put to film, nor is he good enough an actor to adopt basic Southern mannerisms.

Secret Buffy producer Parton carries the both of them with her usual charm and vocal perfection, not only shining brightly herself but even igniting something resembling passion in her cacophonous co-star. Her soundtrack (which she regards as some of her best work) showcases songwriting so indestructible that not even Stallone can destroy them, which is more than can be said for Little Richard who gets murdered decades before his recent death.

Stallone later said this was “the most fun I ever had on a movie” but that he regrets making it, an odd admission for the guy who made Over the Top. In reality this is one of his better comedy scripts, although this may be down to the avoidance of his suggestions; he wanted to “steer clear of comedy” and also asked Whitesnake to contribute songs alongside Parton’s. Or as they say in America: Pardon?