The franchise with the world’s shortest average shot length continues with this Poundland staple from 2005, and this time the Jigsaw Killer (Tobin Bell) has 8 people trapped in a house filled with a deadly nerve agent that will kill them within 2 hours. The Asbestos Killer might be a more appropriate name. 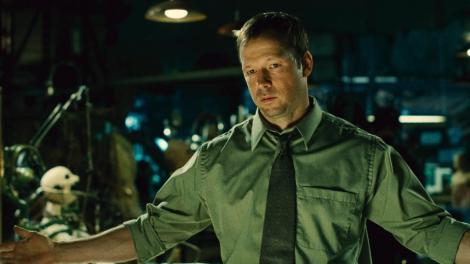 The spider’s web that became a money spinner, the Saw franchise was to the 2000s what Friday the 13th was to the ’80s; a yearly fixture of increasingly gory and decreasingly profitable formula fillers, centring around an “unkillable” villain – the twist with Jigsaw being a terminal illness rendering him as omnipotent as the police are incompetent, and ultimately continuing his work from beyond the grave. Even being arrested by Donny Walhberg at the start of Saw II is part of his plan; he’s always ahead of the cops, Hannibal Lecter-style.

Like the Friday the 13th sequels Saw II ups the kill count and shifts focus onto the elaborate deaths, opening with a lovely “the key to the trap is behind your eye” device – but after that it’s essentially just some people doing an escape room for 90 minutes, turning a Se7en-style puzzle thriller into a body count slasher franchise; Halloween with strobes instead of Strodes. It contains some nice twists and a vat of needles sequence almost as horrible as the acting, but two films in this series is already feeling rusty.

One response to “Saw II”