A cartographer (Jason Flemyng) sets out to map the Russian far east, where he uncovers a mystery involving a dragon’s eyelashes and Tsar Peter the Great (Yuri Kolokolnikov), who’s hiding under the titular iron mask.

It’s never a good sign when a film has been released under multiple titles but this version’s subtitle, Mystery of the Dragon Seal, could easily be mistaken for a David Attenborough documentary, which would be vastly more entertaining.

While Arnie’s fantasy films may not be among his career highlights, Iron Mask rivals even Red Sonja for the status as his shoddiest effort, not least because like that film it’s obvious his scenes (along with Jackie Chan’s) have been shot in a fortnight before being edited in to make it look like they’re in the whole thing.

The generic story is utter fantasy drivel, feeling hacked up, shaken about and reassembled, probably undergoing a re-mashing to better appeal to different markets. Its reliance on voiceover to explain backstory and shoddy CGI make it feel like a sequel to The Last Airbender, but with the radical choice of featuring real Asians. It’s actually a sequel to 2014’s Viy, which I’ve not seen, but it’s safe to assume its fans were disappointed by this. 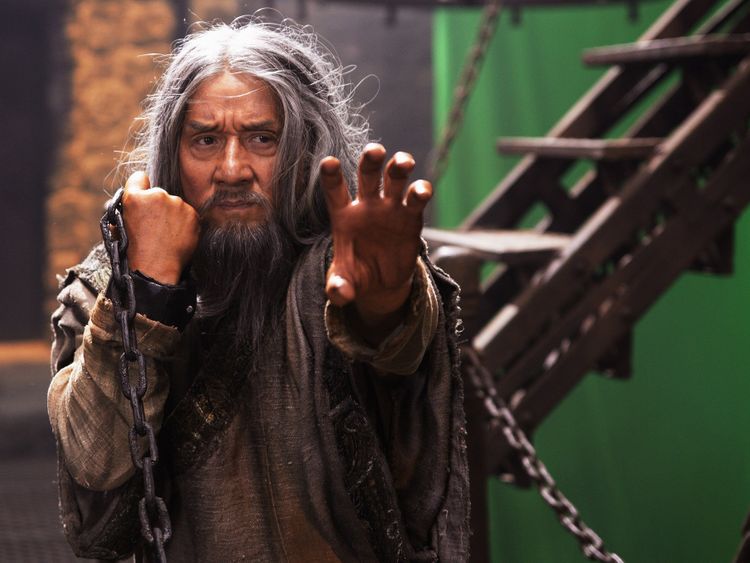 In spite of being backed by both Russia and China it manages to look unfinished. Supposedly Imperial-era cities are bathed in a green light which make it look more like The X Files. I’ve seen better lit glove compartments, and this contributes to a visual quality worse than the fake Hamlet movie in Last Action Hero.

But its biggest technical failure is the dubbing. Filmed in a mixture of English, Chinese and Russian, every scene is dubbed badly, even the English. It’s made even worse by utterly abysmal dialogue which sounds like it’s been Google translated from Chinese.

It seems to be aiming to do for Chinese and Russian nationalism what so many-a Hollywood film has done for the USA, but it feels directed by committee – namely the Central Planning Committee. How things have gone down hill since the Battleship Potemkin.

Its one strength is occassionally good, if unfulfilling, martial arts-based action, courtesy of Chan’s stunt house. But this can’t mask a dire effort from Schwarzenegger, who delivers his most embarrassing work in Asia since those Japanese commercials. A failure that’s visible from space, it’s as ineptly made as it is written, and deserves a seal of disapproval.