Bong Joon-ho’s Memories of Murder would have passed most of us by in 2003, coming a few months before South Korean cinema had its international breakthrough with Oldboy. Following Parasite‘s Oscar haul, UK audiences can finally see this modern classic from one of the world’s finest film industries. 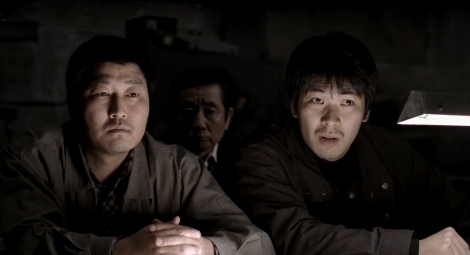 This rerelease couldn’t be better timed, and not just because it currently feels like we’re living in some sort of South Korean version of Secret Cinema. Joon-ho’s second feature is a transcendent thriller about authoritarian incompetence, unchecked police brutality and the systemic abuse of power and women. The movie is based on South Korea’s first ever serial killer case from 1986 which remained unsolved until 2019 (AKA the Korean Zodiac Killer), when the murderer was found to already be serving a jail sentence for killing his sister-in-law; an ironic coda to an absurdly botched case.

After finding the first of many victims bound and ditched in a rice paddy, Song Kang-ho’s (Parasite, Thirst) bumbling detective proceeds to torture innocent suspects without a shred of evidence; the dismissal of science to fit the cops’ narrative is another timely feature. Theirs is a police force with little interest in justice, zero forensic technology and chronic understaffing due to nationwide anti-government protests. This backdrop of civil unrest and military rule looms gloomily over the action, routinely interrupted by civil defence drills due to North Korea’s nuclear tests. No wonder South Korean movies are a little dark.

Almost every scene is set at night and in pouring rain, and the few daytime sequences are washed out and overcast; a world away from Parasite‘s warm, wealthy glow. And although the film is grim, it transcends the I Saw the Devil-style abyss genre through layers of dark humour, emotional reality and social commentary. The detectives are consistently blinded by their own misogyny, so hung up on the victims’ attractiveness that they can’t see the paddy for the rice. They ignore the sensible suggestions of their sole female colleague (who also brings the tea), and the only woman they take seriously is a fortune teller.

Memories of Murder flips the Hollywood procedural and hangs it by its ankles, blood rushing to our heads and taking us to breaking point. Adding a haunting score and surprising pathos, this stunning and subversive tale of a community more afraid of the police than a murderer is sadly much more than a memory.