Netflix recently claimed that “The world had never known a ‘zom-com’ until Santa Clarita Diet.” Assuming they meant zombie rom-com rather than just zombie comedy (unless they’re really brain-dead) this still implies they haven’t heard of Warm Bodies, Life After Beth, Night of the Living Deb, My Boyfriend’s Back or Shaun of the Dead. Maybe they should get Netflix.

“Let’s go to the Winchester, have a nice cold pint, and wait for this all to blow over.”

Even if they meant a zombie sitcom, 2004’s Shaun of the Dead still qualifies, since it’s essentially a big-screen version of Spaced. The reason this simple story of a dead-end Crouch Ender (Simon Pegg) battling undead Londoners works is that it starts by establishing a relatable set of characters (so often an afterthought in zombie fare) and straightforward sitcom dynamics, so as the zombies slowly come into focus, the payoff is virtually guaranteed.

Those brilliant early sequences (particularly chilling during the pandemic) where Shaun mindlessly commutes without noticing the zombocalypse breaking out around him is an uncanny depiction of London and anyone who’s ever felt they were sleepwalking through life. Edgar Wright fills every scene with Aardman levels of British detail and genre literacy, transcending a comedy landscape whose directors are usually content to just point the camera at people pissing about. 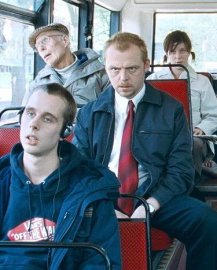 Shaun and Hot Fuzz also represent the twin peaks of Pegg and Nick Frost’s movie careers, their friendship forming the beating (for the most part) heart of the film. In true zombie style, the real menace are the human emotions the ghouls bring to the surface, with an antagonist (Dylan Moran) within the group of survivors. But the film also subverts the way zombies turn us against each other by ultimately having them bring people closer together. This gives the movie more emotion than probably any flick in the traditionally nihilistic zombie genre.

Crucially though it’s a great zombie movie first, understanding the necessity of gore, tension and horror neglected by so many of its imitators. It is elevated by an outbreak of quotable, echoing jokes, pitch-perfect performances (there are so many famous British comedy actors some don’t even get to speak) and literally a jukebox soundtrack, with the best ever use of Don’t Stop Me Now and the second-best use of White Lines.

Hilarious, scary and perfectly plotted, Shaun of the Dead ingeniously establishes the cinematic language of the Cornetto trilogy, the only problem being that it set the bar too high for Pegg, Frost and Wright, and the zom-com genre in general. Still, if you’re upset about Netflix’s cancellation of Santa Clarita Diet, this is a film whose existence is well worth acknowledging.