An affluent nuclear family’s RV breaks down on a military testing site where they’re terrorised by a nuclear family of a not-so-different kind.

Wes Craven’s The Hills Have Eyes is one of those films I read differently every time, as an exploration of humanity’s capacity for brutality, America’s genocidal foundations, a dog movie… this time I saw a story of consumers vs survivors. The family are taking a detour to see a silver mine, where wealth was extracted from the earth so ultimately they could buy the RV that crashes on the land exploited by capitalism and ravaged by the military-industrial complex.

It’s here they encounter the other family, victims of nuclear testing who have to eat dogs to survive. But the “civilised” daughter’s (Susan Lanier) first line is “I wonder how far it is to the nearest cheeseburger,” and she doesn’t even need to eat meat (or keep a bird in a cage in the RV). She’s also constantly drinking Coca-Cola, a company with its own share of violent and environmental crimes. From Coke’s point of view it’s apparently better that their product features in a cannibal movie than have her drinking Pepsi.

Nothing here is accidental. The wealthy family are heading west like the pioneers when they come across the scavengers, whose jewellery evokes that of the Native Americans. When the Christian mother (Virginia Vincent) prays for the Lord to watch over them, He doesn’t. This is another case of Craven exorcising his strict Baptist upbringing, and portraying the police officer (Russ Grieve) with his usual disdain. That Scream‘s Deputy Dewey (David Arquette) is Craven’s most competent cop tells you everything about his feelings for the police.

The reason Craven’s films scared America so intensely is because they revealed its darkest truths, and the reason I love them in a way I don’t some similar films from that era is because you can feel the morality at their core and never doubt the director’s righteous anger. He seems to be saying: “You think cannibal myths are horrible? You should see political reality.” He wrote the script after reading about the legend of Sawney Bean, a 16th-century cannibal whose clan were tortured by supposedly civilised lawmakers. 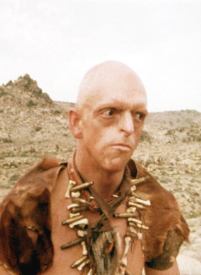 The Hills Have Eyes drills into that hypocrisy, the kind that turns a blind eye to the death penalty, the KKK (Craven includes burning cross imagery), police brutality, fracking and Rudy Giuliani. As rich white Americans these characters are complicit in a cycle of violence against the disenfranchised. To the cannibals, they are “fat” from consumption. Like Deliverance the movie strips them of their comforts and reduces them to survival mode, testing the killer instinct that remains strong in their pet dogs. It’s still there in the people too, but dressed up in fold-out furniture and “Good cheer” needlepoints. Keep calm and carry on consuming.

Speaking of cycles of violence, there is a neat symmetry in the way Craven’s The Last House on the Left inspired The Texas Chain Saw Massacre which then inspired this in 1977 (plus the obligatory franchise). The ominous cinematography, score and performances from James Whitworth and Michael Berryman (One Flew Over the Cuckoo’s Nest) build towards an indelible final freeze frame and a “The end” card that reads like one last sick joke, because we know it’s not.