Hollow Man is a film by the always violent, always absurd Paul Verhoeven of Total Recall and Robocop. Like those films he’s in sci-fi territory again here, but there’s a twist. This time, the film has Kevin Bacon in it. 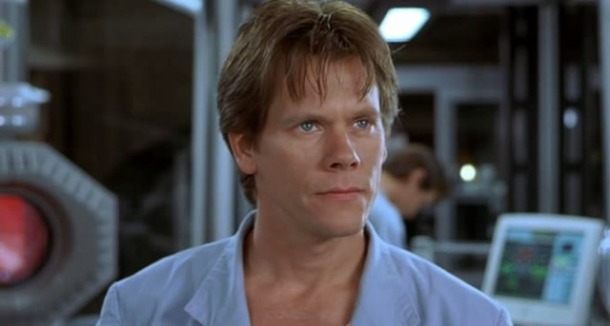 For an actor with as much notoriety as Kevin Bacon seems to think he has in those adverts (have I mentioned them?), he gets remarkably little face time in Hollow Man. This isn’t because his character’s not in it, but because his character is invisible for most of the film following an experiment gone wrong. When honing an invisibility serum, Sebastian Caine (Bacon) decides to test it on himself, presumably having not watched The Fly.

Like The Fly, what starts out as a fun sci-fi film descends into the realms of a violent gore-fest, as things get messy (including a great dog death). Verhoeven can’t be faulted for failing to have fun with the invisibility concept – Hollow Man has some great gags – but one also begins to wish they could have thought of something slightly more inventive for the invisible doc to do than perve on women and generally commit sex crimes over and over again.

While ‘sex offender with invisibility’ might be a zany concept for a film, there are surely more interesting way to examine the implications of that power. The effect of anonymity on our behaviour is touched on, however, which is something I recently wrote about in more detail here.

It’s a pretty fun ride, with some good effects, snappy dialogue and a nice mix of characters, even if they do behave like morons a lot of the time. What results is something modestly enjoyable if not entirely memorable.

Is it ruined by the Kevin Bacon advert?

No, not really. The fact that Bacon is hardly onscreen minimises association with the offending commercial. Also, the fact that Hollow Man is made in 2000 means that Bacon looks quite different from in that ad. He generally does well and is committed to the role and its darker aspects, even if he does inexplicably speak in a spooky “invisible” voice when we can’t see him. We even get to see Bacon’s…er…sausage once or twice, if you watch very carefully. Which I did. ‘Hollow Man Bacon’? More like streaky Bacon.