After my recent diatribe against Robin Williams in my Good Morning, Vietnam review, fans of the zany actor will be pleased to hear I loved his sober performance in One Hour Photo, where he plays a photo technician, Sy, who becomes obsessed with a family whose photos he develops.

This creepy thriller/drama is an interesting piece which examines the condition of loneliness and what a neglected man might do to try and fill a desperate void in his life. Williams gives an expert performance, making this character, whose actions on paper make him somewhat objectionable, sympathetic. 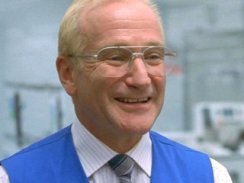 Where he was the worst thing about Good Morning, Vietnam, here he is the best. Sy takes pride in his work and is good at his job, perhaps better than he needs to be, as he meticulously commits himself to his photos in the absence of any friends or family.

It’s Hitchcockian with its voyeuristic themes, as Sy gazes longingly at photos of other people’s families, and also not far in content from Dans La Maison, where a teenage boy becomes obsessed with his friend’s “perfect” family. Like that film, the family turns out to not be as perfect as they seemed, although the family of Dans La Maison are better fleshed out.

One Hour Photo suffers from focusing too heavily on Sy so the objects of his interest never really feel like relatable or understandable characters. As their importance to the film increases towards the end, we never feel we know them more than from the handful of still images we’ve seen. Perhaps this is a deliberate move to put us in a similar position to Sy, but there needs to be more of an emotional connection to care about what happens to them.

It’s shot with the perfectionism Sy shows to his photos, with a precise clarity to mirror his work, that shows director Mark Romanek to be a deft hand. While obviously not about government surveillance, as we recently examined at Screen Goblin, there are certainly aspects of One Hour Photo that connect to what we looked at. Themes of privacy creep in here, and the trust we place in people who handle our personal information.

There’s an interesting scene where Sy describes some of his regular customers including a plastic surgeon developing pictures of patients, a woman who photographs her cats, and an amateur pornographer. All these people have their private lives examined by a stranger in a supermarket. One Hour Photo suggests there may be more to that stranger than you thought.

One response to “One Hour Photo”