Tom Cruise plays “Maverick”, the best pilot in the Navy. Wait… the Navy? Surely you mean the Air Force. No, it’s definitely the Navy, I checked. Maybe there’s a Cruise connection there or something. Anyway, Maverick is basically an outlandish rogue, who’s really good at what he does, but doesn’t have much time for rules and regulations. You know, like loads of other film characters. When something happens, he’s sent to the US military’s top flying school to be trained with the best.

See the giant cheese grater behind Cruise, for all the cheese in this film.

This is basically a teen competition movie but instead of learning to dance or play baseball they’re learning to kill people, and instead of an underdog there’s Maverick, who’s cocky, arrogant, already the best, and the son of a flying legend. 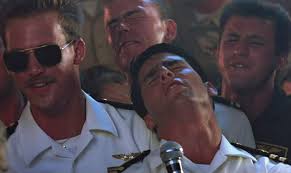 While a lot has clearly been put into the elaborate flying scenes, the fact that most of these take place in a training situation means they’re not tense or exciting, with no real threat. Half the time you can’t even tell who’s who or what they’re doing. This isn’t an action film, it’s a corny teen flick in a military uniform, right down to the main character having to win over the hot girl. The pilots, supposed to be the best in the military, behave like children, and there’s a sense that if they hadn’t wanted $30,000 military aircraft in the film it would have been set in a high school, with the characters learning to drive hatchbacks instead.

As it goes on it stretches the limits of plausibility as none of the characters slap Tom Cruise in the face. Even while playing a fresh faced youngster in 1986 he has the psychotic glint in his eye for which he would later become so famous.

There are a handful of very bad scenes including terribly awkward military flirting and a camp, shirtless volleyball match complete with awful 80s music. Top Gun is laced with 80s music from beginning to end or, as it was called at the time, music.

Pop songs are great in films which are set in the past because they can ignite memories of the era, but here they make it feel dated. It’s like if Top of the Pops 2 was guest produced by Sylvester Stallone. Being dated wouldn’t be hugely problematic if director Tony Scott didn’t also have really bad taste in pop music. “Take My Breath Away”, the movie’s theme, is a leaden, lifeless pop flop. It takes both ls and an a out of ballad, and is massively over used in Top Gun.

If any of the following statements is likely to cross your mind this film may be for you: “gee, I hope that smarmy, arrogant, self-entitled twit becomes the best at killing people”, “God I love 80s pop music, especially awful ballads played on a loop over clichéd movie romance” or “I love Ronald Reagan”. If not, stay away.

“Godammit! This bogey is all over me!” (actual quote)