“Finally Gollum has the spin off movie he deserves!” is a thought that definitely shouldn’t cross your mind when considering whether to watch this gritty drama about a 16 year old girl in Harlem who is pregnant with her second baby.

It follows Precious (Gabourey Sidibe) as she is given a new opportunity at life as she is transferred to an alternative school. This is a drama that pulls no punches as it presents a character so abused and downtrodden that at the beginning of the film she is practically mute. As she is expelled from school she finds hope in her inspirational new teacher Ms Rain (Paula Patton), yet every time a glimmer of optimism appears in Precious’s life, some other horror comes along. 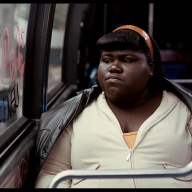 The performances here are outstanding. Newcomer Sidibe is perfect as the film’s lead, and support from Patton as the teacher and Mariah Carey as a Citizen’s Advice worker round off a brilliant cast. Credit also goes to Mo’Nique, who plays Precious’s abusive mother, a part which deservedly bagged her an Oscar. This foul character has the look and attitude of Dr Dre, but without the entrepreneurial ability, yet Mo’Nique even managing to inject a drop of humanity into this monster.

The direction of Lee Daniels fantastically brings this world to life in all its shocking detail, with the dream sequences of Precious set against the realistic style of near-hopeless life. She is the most down-trodden, put upon character since John Merrick in The Elephant Man, as her family background is shown to be the cause of her problems, from her pregnancies to illiteracy. We see how the systems in place are inadequate to protect people like Precious and her two young children, through scenes involving her family’s dealings with well-meaning but inadequate social workers.

Even compared to other films which present a view of poverty, from City of God and This Is England to Sister and Slumdog Millionaire, the conditions on display here are grim, but its heart-wrenching humanity shines through to make this film essential viewing.