I admit I recently did exactly what Hollywood executives wanted me to, and watched this for its big names. As a De Niro and Hoffman fan, I had to witness what is both of their highest grossing film. The week it came out in 2004 I opted for Lemony Snickett’s A Series of Unfortunate Events, yet none of the events in that film were as unfortunate as Meet the Fockers. 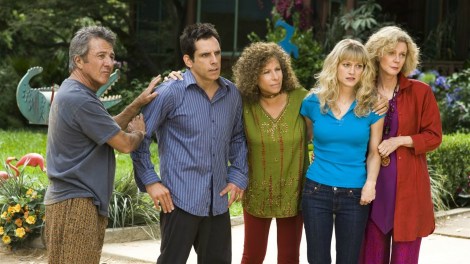 The film follows a dull woman’s parents (Robert De Niro and Blythe Danner) meeting the in-laws for the first time, hilariously called the Fockers. The twist is that the Fockers (Dustin Hoffman and Barbra Streisand) are a lazy Hollywood screen writer’s idea of odd, as they live like spoilt rich white Americans but mention sex at inappropriate times and walk in on people in the shower.

This set up leads to lots of hilarious situations like a baby saying “asshole”, a dog humping a cat, Robert De Niro wearing a boob and a foreskin landing in a fondue. You could argue that anyone expecting quality from a film with this title only has themselves to blame, but crude humour can be good if it’s well done. Fockers is crude, they just forgot the humour. 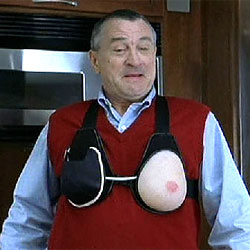 It just isn’t funny. It’s the kind of movie you don’t bother to pause if you go to the toilet because the contents of the film is more predictable than the contents of your bowels. It’s just a bunch of idiots responding the the idiotic situations they’ve stupidly created as they lurch from mishap to mishap, ultimately producing this awful film.

The only person involved for whom this isn’t an all-time low is long-time crud merchant Ben Stiller, who’s completely in his element as Gaylord Focker. Hoffman and De Niro, on the other hand, should both have known better. One of Mr Focker’s hilarious quirks is that he inappropriately talks about his genitalia, informing the Byrnes family of his lone testicle on their first meeting. If only he had two, then he might have had the balls to turn down this god-awful film and keep his integrity intact.

Hoffman at least has some fun with it and throws himself into the silliness. De Niro, by comparison, looks like the cross between a randy earthworm and a constipated blobfish. In his defence he also produced the film, meaning the pile of cash he got for it was probably massive.

Ok, so it’s not the most inane, repulsive or dishonestly sentimental piece of garbage out there, but it is resoundingly bad, and worthy of the derision it received because of the involvement of people who should have known better. The denominator isn’t as low or common as, say, BASEketball, but is nonetheless pretty dismal.

The problems of these characters are so trivial, meaningless and self-induced as to rid this film of any interest apart from the laughs, so when the laughs fail time and time again it’s detrimental to this bucket of sewage. Would any of these actors sit down and watch this film if they weren’t in it? No. Well, apart from Ben Stiller.

9 responses to “Meet the Fockers”