When the cast of a cult sci-fi series are mistaken for a real starship crew, it’s time for the reluctant actors to face a genuine space adventure – and indeed “the role of a lifetime.”

Galaxy Quest boldly goes where the excellent documentary Trekkies has gone before, to explore strange new worlds of behaviour – that of Star Trek fans and their blissful blurring of the lines between fact and fiction. Galaxy Quest satirises this idea with wit, affection and great attention to detail.

Released in 1999, the same year as The Phantom Menace, the film impresses with its visual effects and post-modern playfulness – the mission is constantly sabotaged by the design of the ship, which is an exact replica of the tacky set from the show-within-a-film. Galaxy Quest subverts every Star Trek beat and space opera trope known to man or alien. 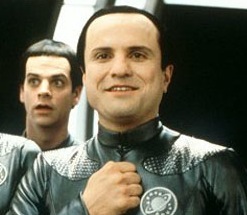 It’s like a sci-fi version of Scream, or the Futurama episode Where No Fan Has Gone Before, in which a Trekkie captures the original cast of Star Trek to make them participate in a convention until the end of time. And like Futurama, it seeks out comedy in every area of its great premise. But unlike the Planet Express crew, it consistently delivers.

The excellent cast nails each role and every joke – Sigourney Weaver’s character complains that her sole purpose on the show is to repeat everything the computer says, and then insists on doing exactly that in real life. Alan Rickman’s resentful thesp grows increasingly exasperated with the scene-stealing heroics of Tim Allen’s cocky captain character. And Sam Rockwell’s disposable extra spends the whole time terrified that he’s about to actually be killed off.

Galaxy Quest is a great comedy but also smart sci-fi, playing out like a meta-episode of Star Trek. Like Trekkies, it takes a knowing but affectionate look at fandom, succeeding for both Trekkies and Treknophobes alike. It’s joyously nerdy, hugely funny and convention-busting. Literally.