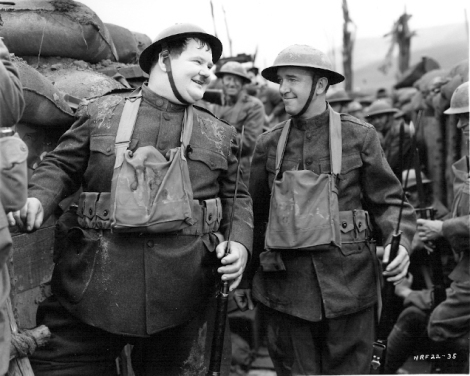 It’ll be over by Christmas

This was the first Laurel and Hardy film Dan and I have seen – but since it came in a box set of 12, get ready for a lot more reviews.

It’s easy to see how influential their brand of slapstick has been, with scenes which have been imitated almost in their entirety in more recent films and TV shows. Hardy is the more headstrong, Paul Chuckle type, whereas Laurel is so stupid he literally fails to understand the meaning of words and seems to exist in a world of his own. He makes Barry Chuckle look like Barry Manilow. Whatever that means.

It’s an extremely physical brand of comedy which benefits from the fact that even elaborate and dangerous stunts have to be done for real, something its contemporaries would do well to note.

The film is more a series of sketches loosly strung together than a feature length story. They vary in length from brief skits to an extended stairwell sequence that forms the centrepiece, and as such there’s also some variance in how funny they are.

It doesn’t feel as fresh as, say, The Great Dictator or Some Like it Hot, but they are clearly masters of their craft, and in spite of dated elements there’s remains plenty of easy fun to be had in their antics. They’re a Laurel and Hardy act to follow!