There have been many, many big-screen incarnations of Bram Stoker’s blood-sucking bat-man, but precious few of them have tackled his origins. Enter Dracula Untold, which takes us back to when he was just plain old Vlad the Impaler, not to be confused with Vlad the Election Meddler.

Besieged by the Ottoman Empire, Prince Vlad (Luke Evans) goes in search of an ancient cave-dwelling vampire (Charles Dance) to gain the strength to defend his land. He gets souped-up vampire powers for three days, and if he can resist the accompanying bloodlust he will return to normal. But if he succumbs to his desire for human bean juice he will be doomed to a vampyric half-life for all eternity.

At the start of the film Vlad is a noble prince and great leader, and is driven solely by the desire to protect his subjects and family. At first I was rather cynical about trying to make the young Dracula into a hero, but the film actually does a decent job of making this plausible, with clear motivation throughout. Although the story would be more interesting if we didn’t already know the ending. 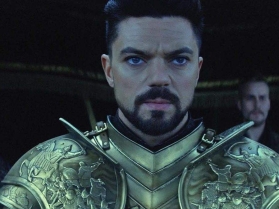 The war makes little sense. Vlad needs to end it in three days, yet retreats to a remote monastery. Meanwhile the Turks invade because their demand for 1,000 boys to recruit to their army has not been met, yet the bloody conflict results in far more than 1,000 of their soldiers being butchered.

What’s more, good-guy Vlad’s utilitarian justification for his indiscriminate impaling is that it makes his enemies surrender, thus saving lives. Yet even after mercilessly massacring an entire army with his bare hands, this approach manifestly fails to stop the Ottoman advance. But at least it results in some impressive battles and set pieces, remaining Draction packed throughout, with well-handled special effects and a suitably dark tone.

It’s guilty of whitewashing, with the Ottoman Sultan Mehmed II played by Dominic Cooper. It also follows the recent trend of clumsily setting up a sequel, which is all the more embarrassing when said sequel never gets made due to poor box office performance. Apparently this was done to tie it into Universal’s ill-fated Dark Universe which has now become so dark it’s impossible to see at all.

Overall it largely avoids the expected pitfalls: waiting until the end to make him into Dracula, not having any impaling or vampire stuff, and failing to make Vlad a plausible hero. It’s also an exciting and fast-paced spectacle, packing a lot into its 92 minutes. As such it’s better than the likes of Victor Frankenstein or Snow White and the Hunstman, even if it’s still not the best bat-based origin movie out there.