Category is: ‘Films with numbers in the title’ – ironic that a Quiz Call answer would be a film about a cursed phone line.

Freddy Krueger himself (Robert Englund) directs this 1988 horror movie, even though you’d think he’d be better equipped as an editor. It follows a pair of cousins, bad boy Spike (Patrick O’Bryan) and nerdy Hoax (Stephen Geoffreys), whose calls to a haunted horoscope hotline have uncalled-for consequences. 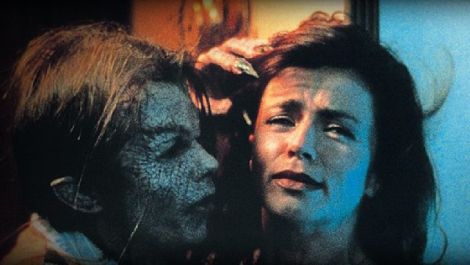 Co-written by Brian Helgeland (A Nightmare on Elm Street 4: The Dream Master, L.A. Confidential, Legend), 976-EVIL has the daft effects-driven quality of a Nightmare sequel, but the writer-director duo look beyond Elm Street for inspiration, taking cues from Carrie (regarding the religious zealotry of Hoax’s mother) and Christine (his transformation from emasculated wannabe to sexualised revenge-demon) – with werewolves thrown into the mix just for the howl of it.

Eventually lending its name to a brilliant Deftones song, 976-EVIL‘s bonkers plot is at sixes and sevens but when the evil comes along the dialled-up special effects and hellish production design pick up the slack – along with cats galore, fish falling from the sky and one of the genre’s finest interruptions to a poker game (“Would it be possible to enter the game with a pair of hearts?”). It’s silly but wired with a sense of mad fun missing from today’s fright flicks, emerging as enough of an oddity to warrant a watch by fans of ’80s horror.

976-EVIL isn’t Deftones so much as tone-deaf, but it does what Quiz Call hardly ever did: it pays off.