DEA interrogator and former Army Ranger Tom Hardy (John Travolta) is brought in to investigate the apparent murder of Sergeant Nathan West (Samuel L. Jackson), who disappeared while on manoeuvres in Panama. But after questioning two survivors (Brian Van Holt and Giovanni Ribisi) he realises the story is full of holes.

Basic walks an awkward tightrope between investigative crime film and war movie, with elements of A Few Good Men and Full Metal Jacket but the pacing of a few full men, lacking the most basic elements of storytelling. The promise of a Heat or Face/Off style cat and mouse tale between the Pulp Fiction pals is dissipated by the fact Jackson features almost entirely in flashback so get little time with Travolta’s hateful agent. 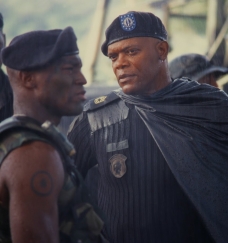 Directed by John McTiernan, one of the most successful action film makers of the 80s and 90s (Predator, The Hunt for Red October, Last Action Hero), he seems out of his depth with the complex story and his failure to move with the times makes it feel stylistically retrograde. His hap-hazard approach leaves important dialogue barely audible, not helped by distracting lightening flashes throughout every outdoor scene (and even some indoor ones), like he has a vendetta against the epileptic community. It’s hardly surprising this is his last film to date.

The soundtrack is messy with a run-of-the-mill score combined with Moby’s Natural Blues and Ravel’s Bolero. The supporting characters in West’s troop are under-written which can’t be masked by over-acting, in spite of some valiant attempts. The constant loud noises and exponentially outrageous twists result in a final 20 minutes which reach an almost entertaining fever pitch, but can’t prevent this film from being Panama banal.