Rob Reiner of This Is Spinal Tap directs this courtroom drama which focuses on military lawyer Lt Daniel Kaffee (Tom Cruise), as he defends two marines against the charge of murder.

This is by far the most interesting film I’ve reviewed in this foray into the world of all things Bacon, but fourth on the billing, he’s not exactly centre stage here. It’s an interesting film because it examines the extent to which people should be expected to follow orders, and at what point military discipline becomes unethical conduct. It’s also a gripping courtroom drama with good characters and superb acting.

It’s Tom Cruise’s show here, and boy does he steal it, demonstrating his surprisingly broad acting range which seems to have petered out in recent years. Admittedly his character is a bit of an asshole, which seem to be the only roles in which Cruise can excel. I wonder why.

With support from Demi Moore and Jack Nicholson, Bacon is far from the forefront here.

It’s ruined in the sense that in that Kevin Bacon advert A Few Good Men Bacon trots out war movie clichés like “there I was, deep behind enemy lines”, when actually it’s not a war film at all, and Bacon’s character seems to have a cushy desk job.

Yet it’s a good enough film that connotations with that Kevin Bacon advert have minimal impact on enjoyment. Also, serious military buzz cut Bacon is a more appealing screen presence than young dude Bacon of Footloose or wiseguy Bacon of Hollow Man, even if it does make him look like Simon Cowell. 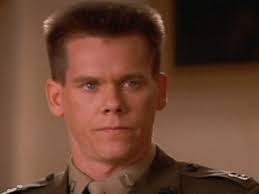 You want the truth? Yes. This is a great film. If anything good comes out of that Kevin Bacon advert it’s that people might watch A Few Good Men.