Kasper Collin’s 2005 documentary spotlights the eponymous saxophonist whose freeform playing in the 1960s rocked the jazz world back on its formal heels.

People talk about rock bands being crazy but these cats were truly wild. Family drama, mental breakdowns and embezzlement (and that was just one night) plagued this group of struggling musicians in New York, their radical new sound too abrasive for American audiences. Ayler found more love in the director’s native Sweden; the filmmaker highlights Europe’s greater openness to avant-garde jazz and black musicians as depicted in 1986’s Round Midnight.

As in his follow-up I Called Him Morgan, Collin makes wonderful use of a limited archive and strikes a tender tonal balance between sadness and celebration. This is another movie seeking to make peace with a tragedy, through intimate access to Ayler’s family and collaborators. Collin repeats phrases and images like a soloist restating a theme. “This is the only way left for musicians to play,” says Ayler, “all the other ways have been explored.” 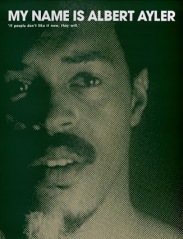 In illuminating radio interviews we hear the frustrated artist lament his constant rejections by the jazz community (“In a few years they will understand the music.”) and compare himself to Picasso long before Kanye West. We see powerful performance footage from the ’60s, showcasing Ayler’s guttural screeching that made John Coltrane sound like Johnny Dankworth. We learn that Coltrane requested Ayler and Ornette Coleman play at his funeral, the audio from which sounds like no funeral on earth.

Collin has Ayler’s former bandmates listen to old recordings, which remain exhilarating, visceral and frightening experiences; the sound of a man trapped and reaching deep inside himself for pure expression of the primal and spiritual. The film gets under the skin of a figure still shrouded in mystery (his body was found in the East River in 1970), whose love of music comes through as strongly as the reactions of those who never even thought he could play it.