Some time after Ocean (George Clooney) and his gang of thieves pulled off their epic casino heist, casino owner Terry Benedict (Andy Garcia) is hunting them down for his money back. To re-raise the largely spent cash Ocean enters into a bet with a top thief (Vincent Cassel) to see who can steal a fabergé egg from a museum in Rome. 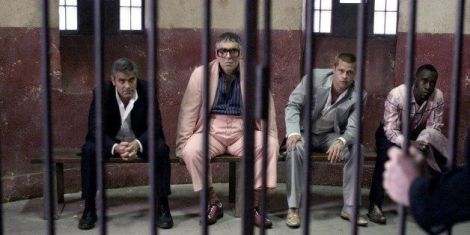 This sequel takes the characters of Ocean’s Eleven and plonks them in a story which lacks the humour and high-energy fun of the original. Most of the swollen band of thieves have nothing to do, not least because this is a heist movie without a heist in it. The stylish direction and bright lights of Vegas are replaced by washed out European capitals. And there’s a hokey and nonsensical story involving a cat burglar called Night Fox who leaves a calling card wherever he goes, To Catch a Thief style.

The cast is even more impressive than before, with the addition of Eddie Izzard, Robbie Coltrane and Catherine Zeta-Jones. But the cleverest bit of casting is Julia Roberts as Tess, a woman who looks just like Julia Roberts. It’s the role she was born to play as she uses her resemblance to the celebrity to get close to the egg. Although if that plan had failed they could have used the members of the gang who look like Brad Pitt, George Clooney, Matt Damon or Don Cheadle.

The meandering and overstuffed story barely steals a single laugh in its  running time and is at once over-long and insubstantial, leaving you feeling like nothing has happened. Throw in an awful Bruce Willis cameo and you have the worst crime movie since that Italian Job remake, although at least this one is actually set in Italy. When in Rome, don’t do as Ocean’s Twelve does.