Brigitte and Ginger (Emily Perkins and Katharine Isabelle) are goth sisters who spend their time hanging out in their prison cell of a bedroom, staging their own deaths for school projects and planning the suicide pact they’ve had since childhood – until Ginger gets bitten by a werewolf and snaps. 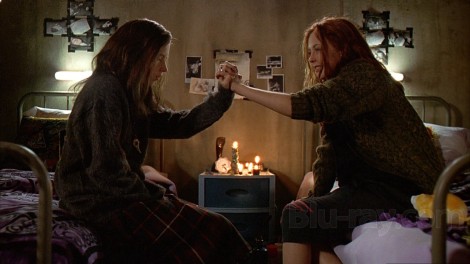 This Canadian horror from 2000 (set in the same town as 2015’s A Christmas Horror Story) is the film Jennifer’s Body wishes it was – a twisted tail of female sexuality, agonising puberty and losing your best friend to adulthood. Where Neil Jordan and Angela Carter’s The Company of Wolves imagined the lycanthrope as male predator in the story of female sexual awakening, here the werewolf is woman. Like Carrie before her, Ginger’s “Curse” arrives along with her period and the underdog turns rabid.

Ginger Snaps‘ sardonic performances, sarcastic dialogue and rounded characters make it one of the all-time great teen movies, with just the right balance of biting satire and sincere emotion to leave a serious mark. The autumnal colours and moody soundtrack create an offbeat teen-wolf world where werewolf lore is imparted not by gypsy fortunetellers à la 1941’s The Wolf Man, but by the local drug dealer (Kris Lemche).

The plasticky werewolf effects may not be quite up to scratch but you believe every second because you care about Brigitte and Ginger so much – not least for their ability to make quiet fashion statements out of chokers and matted hair. Weird, witty and surprisingly soulful, Ginger Snaps is a feminist twist on the werewolf genre that really takes the biscuit.