A journalist (Nanako Matsushima) faces the toughest deadline of her career when she’s given 7 days to live after watching a cursed videotape that resembles one of David Lynch’s home movies.

The film that launched a thousand scary lank-haired girls, 1998’s Ring (Ringu in the Japanese pronunciation) combines traditional ghost stories with modern technophobia; Onibaba meets Videodrome. The horror industry was crawling out of a video nasties scandal-shaped hole at the time, a period where videotape was deemed illicit, evil and cursed. Based on Kôji Suzuki’s 1991 novel, Ring seamlessly integrates this potent paranoia with frightening folklore (compared to the disappointing denouement of Poltergeist) and the characters proactively investigate the curse instead of being told everything in an exorcist’s exposition dump. 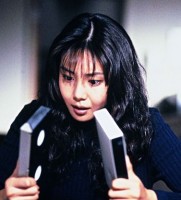 “I only have 7 days to take this remake back to Blockbuster or Naomi Watts will take my job!”

As in Candyman, the movie opens like a teen slasher (the startling telephone rings recall Scream, released 2 years prior) before becoming a female-fronted investigation into urban legends and old wounds. Hideo Nakata’s (Dark Water) doom-laden direction reveals hidden depths and strange undercurrents of sadness, showing great restraint in his powerful use of silence and sparing deployment of the well-dwelling Onryō or vengeful spirit Sadako (Rie Inō); there’s only one big special effects shot and it’s just about the best effects shot in all of cinema.

This sparsity of dialogue and emptiness of locations (when our characters leave the room Nakata leaves the camera pointing at the television just long enough to make it unnerving) creates a creeping sense of dread and uncanny spectral fever. The rich visual quality stands in stark contrast to the jittery, grainy video footage, with an ethereal, screeching score that’s also minimised for maximum impact. A landmark of J-horror and international cinema, Ring‘s unaffected darkness, palpable emotion and viral ending make for a transcendent techno-chiller that’s hauntingly beautiful and well scary.