There was lots of gushing over this film when it first came up. But not enough, if you ask me, so I’m going to gush about it some more. I’m going to gush more than the giant tsunami that destroys San Fransisco in San Andreas. Yeah, that much.

The Dark Knight is a film that is so good it’s going to be hard to describe here. It’s not only the greatest superhero film ever made, but one of the best crime films of the last 10 years.

Shortly after the ending of Batman Begins, Batman (Christian Bale) and still-not-Commissioner Gordon (Gary Oldman) are working on hounding out Gotham’s remaining gangsters by raiding their bank accounts and pursuing their accountant, Mr Lau (Chin Han). They have the help of Gotham’s new District Attorney Harvey Dent (Aaron Eckhart), but there’s a new threat: the Joker (Heath Ledger), a self-described agent of chaos, who is bent on turning Gotham’s citizens against each other and bringing the city to its needs.

On paper a villain with no back-story and no obvious motivation beyond his own amusement shouldn’t work. But so great is the writing, and Ledger’s Oscar-winning performance, complete with improvised ticks and mannerisms, that he instantly took his place alongside Hannibal Lecter and Darth Vader as the best movie villains ever. He’s mesmerising, iconic and totally unique, without the need for a strange voice or accent. The best scenes in this film aren’t the incredible car chases, fights or explosions (brilliant as all those are), but the scenes involving Batman and the Joker, of which there are many. Seeing them play mind games with each other like Pacino and De Niro in Heat is thrilling to watch, and uncharted territory for the superhero genre. 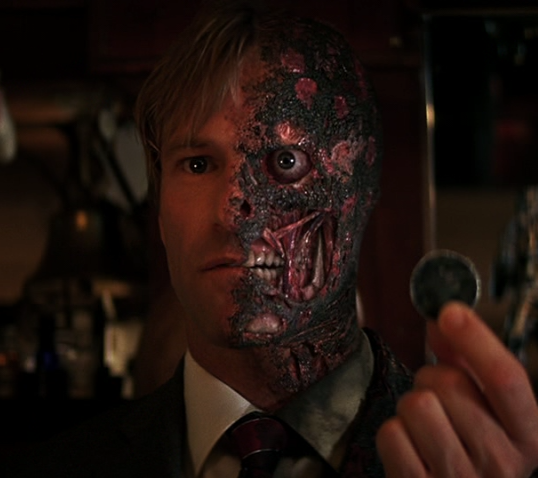 Yet brilliant as Ledger is, such is the quality of the film that he doesn’t steal the show. Eckhart’s unfairly neglected performance as Harvey Dent then Two-Face, complete with stunning CGI mutilation (apparently the least gruesome of the possible effects shown to Nolan), shows both the heroic and villainous aspects to the character before his hideous transformation making him both easy to like and easy to hate.

Every details is honed to perfection, from the Batsuit (Batman can now turn his head!) to Rachel Dawes, thanks to her re-casting as the impish-smiled Maggie Gyllenhaal. The technically brilliant Batmobile from Begins literally gives birth to the Bat-pod (both of which they actually built) which allows for a stunning car chase which involves every type of vehicle except cars, and even includes a nod to The Empire Strikes Back. The Hanz Zimmer and James Newton-Howard score steers clear of big, bold themes, but manages to be distinctive enough to bring memories of the film flooding back.

Subversive, stunning and instantly iconic, this is the Citizen Kane of superhero movies and gets better every time you watch it. In fact, I think I’ll watch it again right now. Bye.

8 responses to “The Dark Knight”