First up The Woman in the Window (“Films with ‘Man’ in the title“) a film which is certainly obscure enough to be a Quiz Call answer, even if it doesn’t deserve to be.

Psychology professor Richard Wanley (Edward G. Robinson) is alone for the summer while his family is out of town, when he finds himself drawn to an alluring painting of a woman (in a window). Fortunately the woman, Alice (Joan Bennett) is standing nearby so she can pick up the men she sees staring at it. So that’s what people did before Tinder!

So far so Seven Year Itch. But the plot rapidly goes from window to pain when Richard visits the Alice’s apartment for a drink, and another man (Arthur Loft) bursts in and tries to strangle him. Richard kills the man in self defence, and the pair decide to cover up the death, lest they be accused of murder.

The story itself is fairly straightforward. They dispose of the body, then the police start sniffing around. It turns out the pair have overlooked small but revealing details, and Richard’s friend on the police force brags to him about their progress in the case while Richard repeatedly puts his foot in it by blurting out details of the murder that he shouldn’t know. 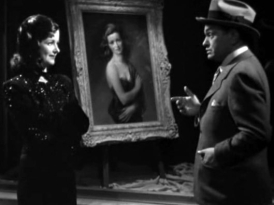 It’s one of the noiriest noirs ever, as one of the films that led to the coining of the term, complete with long, dark shadows, impending threat and a femme fatale for the ages. Elements feel Hitchcockian, especially when Richard starts seeing police officers everywhere on his way to dump the body. But while Hitchcock tends to deal with murders and false accusations, The Woman in the Window is about an accidental killing and its aftermath. This creates slightly more sympathy for its protagonists. And while Richard’s apparent attempt to cheat on his wife doesn’t exactly endear him to the audience, he doesn’t deserve the string of misfortune that ensues.

It’s impeccably well made by Fritz Lang in 1944 after his move to America. There’s a level of impending threat to rival M with tension maintained throughout, and it gets more unpredictable as it goes through, complete with a satisfying final act payoff. So catch it while it’s on Netflix, and avoid missing this window of opportunity!

4 responses to “Quiz Call: The Woman in the Window”