A response to the question ‘Films with “Man” in the title‘, Harvard Man has the distinction of actually having the word ‘man’ in the title, unlike The Truman Show, The Manchurian Candidate and The Woman in the Window, which is why guessing it would have bagged you a miserly £100.

Alan (Adrian Grenier) is a philosophy undergraduate at Harvard who spends his life on the basketball court, taking after his parents who literally live on a basketball court since their house was blown away by a tornado. When he gets an opportunity for some quick cash fixing a match he ends up caught between gangsters, the FBI and his love interests, when he should have just set up a cheap, late-night, premium rate phone-in quiz show. 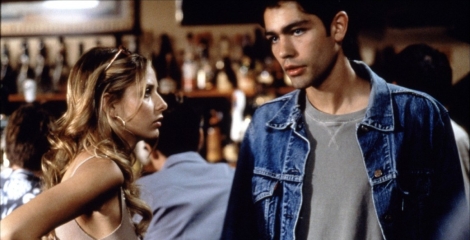 The problem is the shoddy execution, which includes jarring mid-shot cuts and a ludicrously ill-fitting Bach soundtrack (he actually gets a music credit). The performances are flat and wooden, particularly from Grenier and Sarah Michelle Geller, and the tone is all over the place with goofy criminal shenanigans smashed together with Wittgenstinian musings on the shortcomings of language for conveying complex thoughts.

But the philosophy is irrelevant window dressing, and the thrown together feel makes it obvious that it’s the shortcomings of director James Toback which make conveying this story so challenging.