Human Googlewhack Wesley (James McAvoy) hates his job, his boss (Lorna Scott), his best friend (Chris Pratt) and his life, so when he’s approached by Trinity (Angelina Jolie) and Morpheus (Morgan Freeman), he joins The Loom Band, a group of assassins who deal out justice based on cryptic messages delivered by a mystical loom. 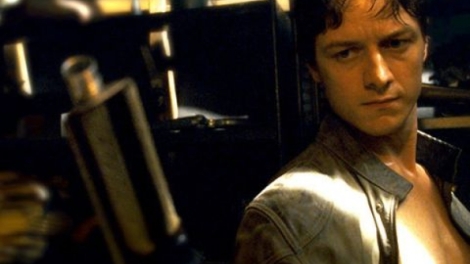 Set back in the days before James McAvoy could afford to be choosy, it shamelessly weaves together scenes lifted from other films. The shadow of The Matrix looms large, but in place of Hugo Weaving there’s actual weaving. The first half hour is an almost shot-for-shot remake of that film, before moving onto other turn-of-the-century borrowings including American Psycho (complete with talking cash machine) and Fight Club. There’s a very Terminatory car chase and even a Rocky-style training sequence in a meat fridge.

The only thing that feels really original is the bizarre loom-based story which seeks to do for textile factory workers what The Matrix did for computer hackers, and fails. The basic concept is similar to Minority Report, but where that film is about uncovering and eventually overthrowing a flawed system, the issue of whether it’s right to kill someone because a loom tells you to is never resolved.

The flimsy plot suffers from low aspirations, providing just enough story to facilitate the relentless action and exploding rats. It’s awash with blood splattering ultra-violence and some of the set pieces are pretty entertaining, particularly its obsession with beyond-absurd car stunts and characters riding on the top of trains for no reason. This adds enough fun to make this film almost watchable, even if it doesn’t care as much about physics as it does about looms.