There was a time when the Wachowskis were hot property in Hollywood, but now it’s hard to hear their name without hearing ‘watch out, skis!’. Well there are no skis in this, their latest (and last?) movie. But there is just about everything else.

I was trying to pinpoint exactly where Jupiter Ascending went wrong so started to watch it again from the beginning. The answer is the first line of dialogue: “Technically speaking, I’m an alien”. And it gets everything else wrong from there on. From casting bemused Mila Kunis as woman who has the power to control bees, to making Channing Tatum a half human, half wolf, half bird creature who’s been kicked out of a biker gang and flies around on Spock’s hover-boots.

I once saw the chemistry between Anakin and Padmé in Attack of the Clones compared to ‘two chairs humping’. The Wachowskis seem to have taken that as a starting point, replaced the chairs with rocks and replaced the humping with trying to locate blame for some recently expelled flatulence.

Like The Last Airbender, Gods of Egypt and Valerian, there’s a wild contradiction between the relentless, mind-numbing, candy dispenser fight sequences and the indifferent acting by performers who look like they don’t know or care about the surroundings that will be pasted in around them. And when was the last time you saw a big budget film with noticeably fake-looking prosthetics? Really shoddy work. 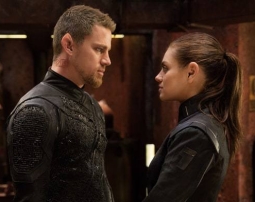 Not every aspect of the film is carelessly made. The humans are well integrated with the generic visual effects during many of the action sequences, with Mila Kunis having to spend a lot of time bungee jumping on a massive blue sound stage. But it is incompetently made, as a hundred different ideas compete for oxygen, and ultimately all end up stifled.

Many plot elements or visuals are directly borrowed from other well-known films, including those of the Wachowskis themselves. Kunis plays Jupiter Jones (which sounds like it has a ring to it, until you realise that’s Saturn), who’s tired of her mundane earth life and is destined to save the human race from their secret slavery. So, the same plot as The Matrix, with aliens in place of robots.

They lift things from the worst Star Wars and Star Trek films, tween romances like Twilight and other recent sci-fi adventures like The Hunger Games. There are bits which look like Back to the Future, bits which look like Gladiator and bits which look like Terminator. Unfortunately there aren’t any bits that look like they’re made by a competent director, let alone two. Almost every scene is fused with a sense of déjâ vu, but this is worse than a glitch in the Matrix. There’s something fundamentally wrong here. 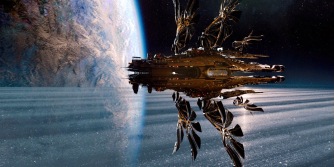 Given current trends, we can only assume the Wachowskis were going for a strong female lead, which they are completely incapable of writing. The problems with Jupiter Jones go far beyond her ear-gratingly facile name. She’s boring and stupid, constantly needing to be rescued by Tatum’s Caine, acting out of narrow self-interest and doing everything she’s told by men. She’s actually a worse lead than Neo, if you can believe it. Tatum himself is almost as bad, as is half-man, half-bee, half Monty Python sketch Sean Bean – once again the only Yorkshireman in his society.

It’s punctuated by scenes which are cringingly out of place. To claim her inheritance, Jones must navigate an apparently satirical space bureaucracy in a severely misjudged sequence, and in other places it jumps from silly space romp to graphic torture or childbirth scenes in a matter of seconds.

But in a film which is pretty much a cinematic disaster from beginning to end, the worst thing, by quite some distance, is the performance of Eddie Redmayne, who won the Academy Award the same year for his performance as Stephen Hawking. He speaks in a strained mumble, permanently seated on an evil throne in a CGI palace in one of the all-time worst movie performances.

While it’s hard to see how even other characters in Redmayne’s scenes can hear what he’s saying, the Wachowskis seem to go out of their way to make dialogue inaudible throughout. In one scene, Jones, with her already hard-to-understand family of cod-accented Russians, discusses important matters over dinner, muting the characters further as they speak through full mouths.

Every cliché of sci-fi dialogue is used to exhaustion. Rather than showing us things happening, characters stop and tell us. The talking bits are at least marginally better than this year’s Valerian, except Valerian was written by someone who wasn’t a native English speaker. The Chicago-born Wachowskis have no excuse, and lack Luc Besson’s visual flair which made Valerian watchable.

The film’s only saving grace is that by being so utterly terrible it becomes hilarious throughout. The only thing consistent about this film is its lack of originality, which strongly suggests the Wachowskis really only ever had one good idea. And when you’re ripping off a film directed by William Shatner, you know you’re in trouble.