Three Men and a Little Lady might seem like the perfect unguessable answer but the producers obviously didn’t count on people watching Quiz Call precisely because they just watched the movie and got drunk to forget it.

The three men and a baby are back in this 1990 sequel, except not really since it abandons the cute child-rearing premise and focuses on the will they/won’t they/they definitely will so turn it off now relationship between Tom Selleck and Sylvia (Nancy Travis) as she ships off to London to star in A Midsummer Night’s Dream. So considering two men and the little lady hardly appear it should be called A Man and a Woman. Or Two Girls One Puck. 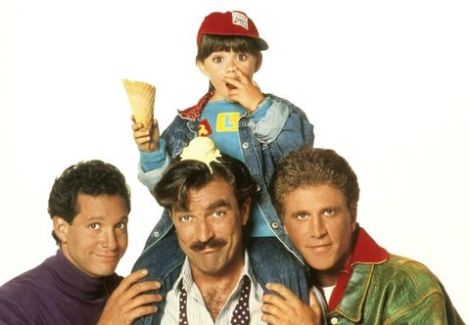 Magnum gets a taste of his own medicine.

The baby has grown but the writing has degenerated in this volte-face from family farce to non-comic romance, which may have stemmed from the limited availability of Ted Danson as he was busy filming Cheers, shifting the emphasis onto a plot about Richard from Friends ruining Sylvia’s marriage that feels more Esther Rantzen than Ted Danson. At the same time the movie reverses its predecessor’s progressive family values by asserting that Sylvia must raise her child with a husband, centring around the mummy dearest barely featured in the first film now desperate to marry whichever dummy’s nearest.

Where Leonard Nimoy’s original direction walked a fine line (particularly for a man wearing hover-boots) between silliness and sentiment, Emile Ardolino’s (Sister Act) footing is closer to Channing Tatum in Jupiter Ascending, clumsily lurching between saccharine inauthenticity and woeful attempts at humour more painful and less funny than childbirth. Throw in the ‘send them abroad’ schtick of all the laziest sequels (Garfield: A Tail of Two Kitties anyone?) and an awkward streak of Anglophobia, and Three Men and a Little Effort is an irritating irrelevance. No wonder Richard didn’t want any more kids.