In this 80s coming of age story a group of misfit kids discover a treasure map and go in search of riches. Think Stand by Me meets Indiana Jones, complete with Stand By Me‘s Corey Feldman and Temple of Doom‘s Jonathan Ke Huy Kuan. 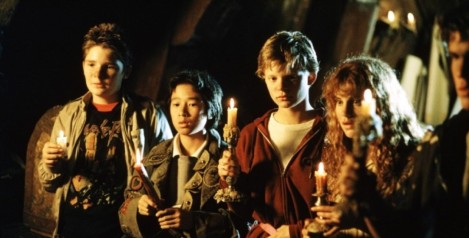 The film felt tonally confused to me: a kiddie adventure movie with swearing, sex references and a suicide gag in the first five minutes. But on reflection I can see why it was a beloved film to young people of that era. It’s the 80s equivalent of Deadpool, a fun action/adventure with language and subject matter which make the kids feel like they’re watching something grown up. 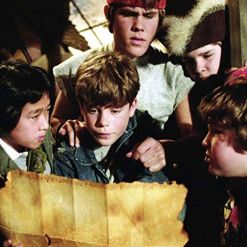 But it has much more heart than Deadpool thanks to decent performances from the leads, and an underlying message that it’s not the treasure that’s important but what they discover about themselves. And the adult themes are a crucial aspect of the film’s coming of age story.

The four boys are Mike, the main one (Sean Astin), Mouth, the talker (Feldman), Chunk, the fat one (Jeff Cohen), and Data (Quan) the inventor. And the cast is rounded off by Josh Brolin as Mike’s older brother, and Martha Plimpton and Kerri Green as Andy and Stef, the girls. Astin is instantly recognisable to those familiar with his adult work, whereas Brolin is completely unrecognisable, and not just because he doesn’t have the purple skin for which he is so well known.

The truth is I got very little out of this in terms of entertainment value, but I can appreciate that it’s a well-made film and can see why it resonated with its target audience. Spielberg’s fingerprints are clearly visible in the broken home story and adventurous premise. And while it may be the inferior of the following year’s Stand By Me, Brolin and Astin went on to have the last laugh, establishing successful film careers while Wil Weaton peaked at 15 as Star Trek‘s Wesley Crusher.

This film has a similar feel to other 80s classics, from Back to the Future to Big Trouble in Little China, but is better as a nostalgia trip than as essential contemporary viewing.