Rebooted last week, the Wrong Turn franchise began back in 2003 when cars had CD players instead of sat nav. While fiddling with a Queens of the Stone Age disc, Desmond Harrington (Dexter, Love Object) crashes into a camper van and goes with his fellow strandees in search of help in the West Virginia mountains. What could possibly turn wrong?

Strollin’ with the homies.

It’s fitting that a film called Wrong Turn should be badly directed, although the title could just as easily refer to a career move. Eliza Dushku (Buffy the Vampire Slayer) turned down a Faith spinoff to pursue a movie career that stalled in the opening car crash, though compared to working for Joss Whedon it was probably a walk in the park. Likewise for Jeremy Sisto (Clueless, Six Feet Under) Wrong Turn proved something of a dead end. That the film would garner six sequels will come as little consolation to the actors whose characters are dispatched with the efficiency of Volkswagen engineering, a spoiler if you’ve never seen a slasher flick before. 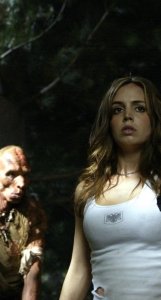 Our protagonists appear only to have heard of them. “I need to remind you of a little movie called Deliverance,” Sisto says before nosing around a shack resembling Leatherface’s cabin, and turning on all the lights when they’re trying to hide from the very hungry cannibals. Producer Stan Winston wheels out what looks like the lumpy-headed prosthetics he designed for Jason Voorhees some 20 years prior, his mutated hill-folk a pale imitation of The Hills Have Eyes. Where Wes Craven’s film had soul beneath the violence, this has nothing beneath the nothing. Unless you count some horribly hokey sound design and a pair of characters who keep interrupting the massacre to discuss getting married, to the point that it’s like watching Ross Geller in a hillbilly horror movie: The One with the Banjos.

Too silly to be scary but not enough to be entertaining, Wrong Turn is another hack job from the writer of Halloween 4. Just as we needed Scream to put the kibosh (however briefly) on franchises like that, it required Tucker & Dale vs. Evil to stop junk such as this. Except they’ve just brought it back. Forget Bill and Ted, only Tucker and Dale can help us now.